“Blott Kerr-Wilson is the most innovative shell artist working today.”

I recall first discovering Blott Kerr Wilson’s extraodinary shellwork through a magazine listing less than an inch wide. The photograph, of a piece framed for wall mounting like a painting, sang off the page and demonstrated a completely original approach to shelling.

While Blott is also a master of both the formal, classical arrangements often seen in historic interiors and grottoes, this artwork showed her breaking with tradition and exploring the potential offered by limiting herself to just one or two species, repeated by the hundred.

The artworks featured in this gallery focus on this exploration of the mathematical nature of shells, their movement, their colour and response to light. Working almost entirely to commission, Blott is found either in her studio creating framed artworks like those illustrated in the gallery below, or somewhere in the world shelling directly to the wall of an interior room, loggia or grotto. 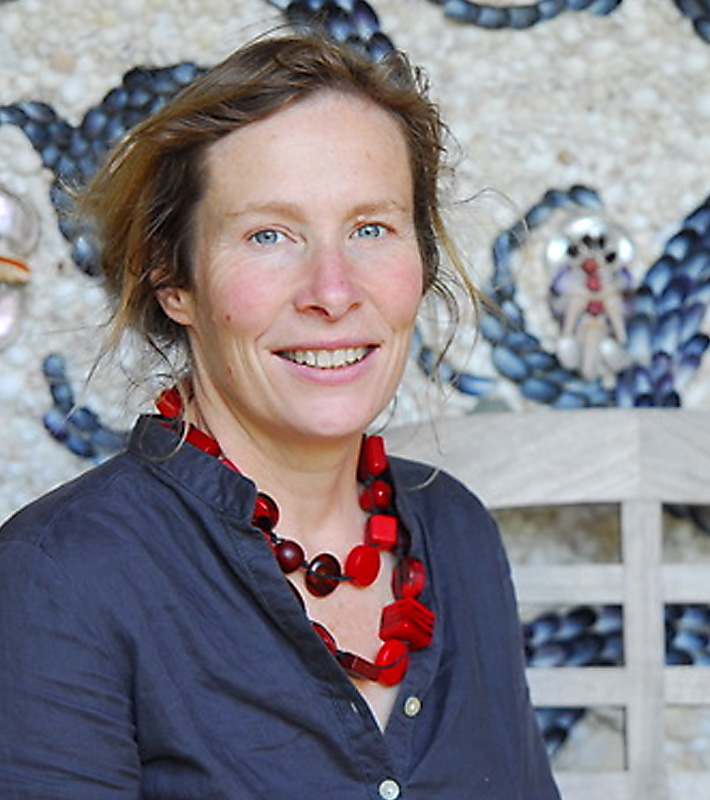 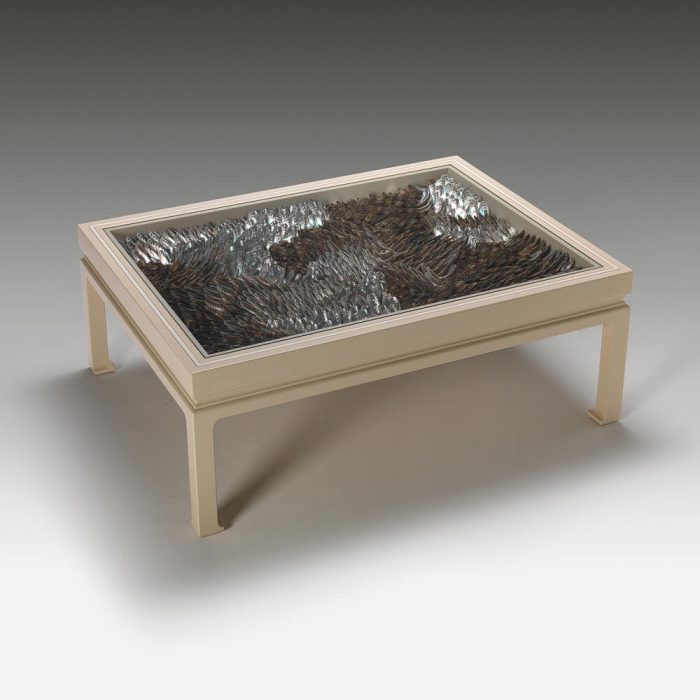 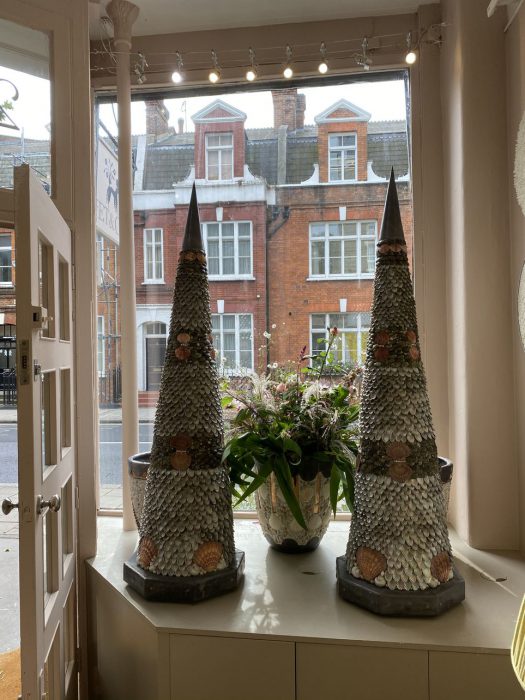 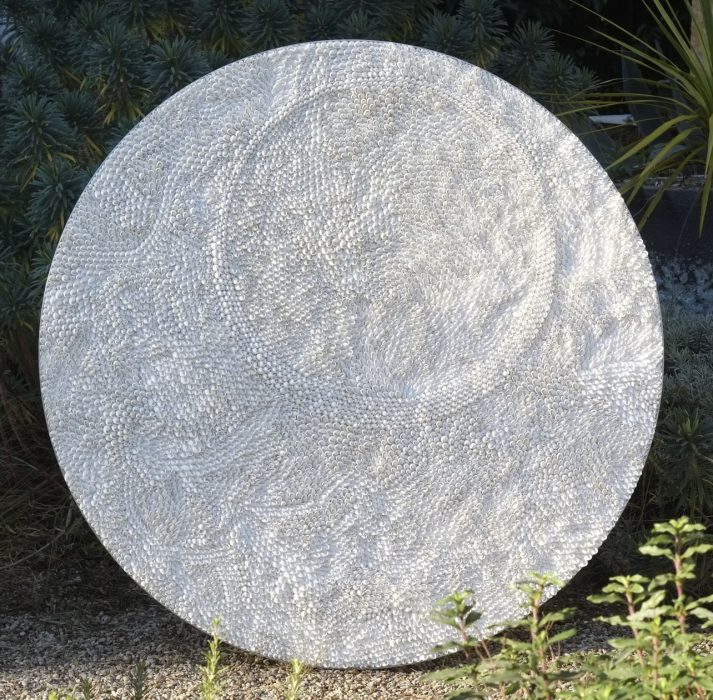 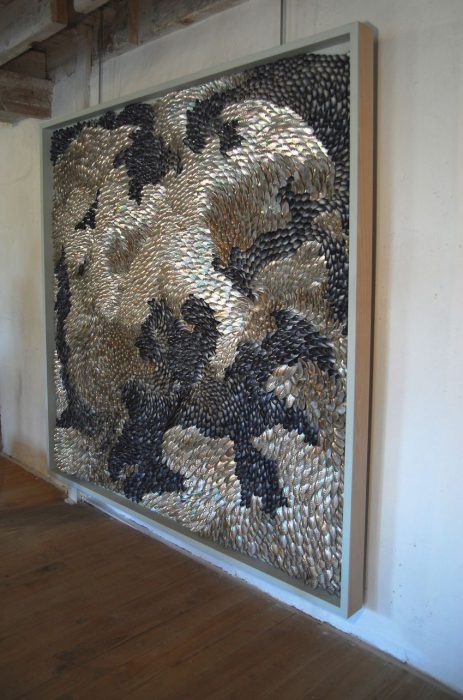 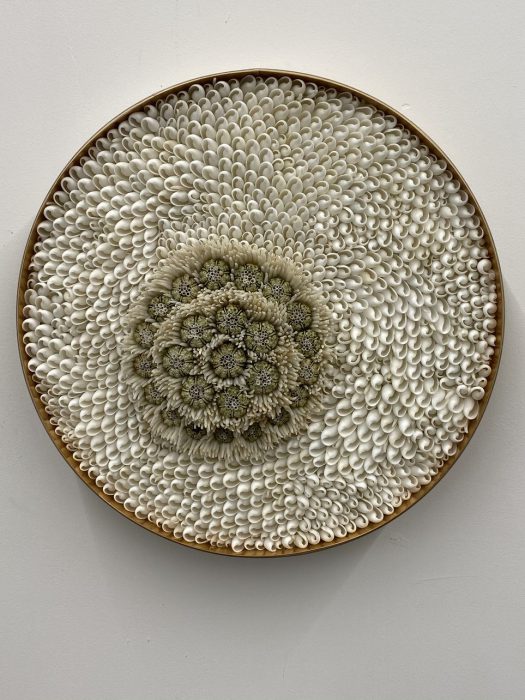 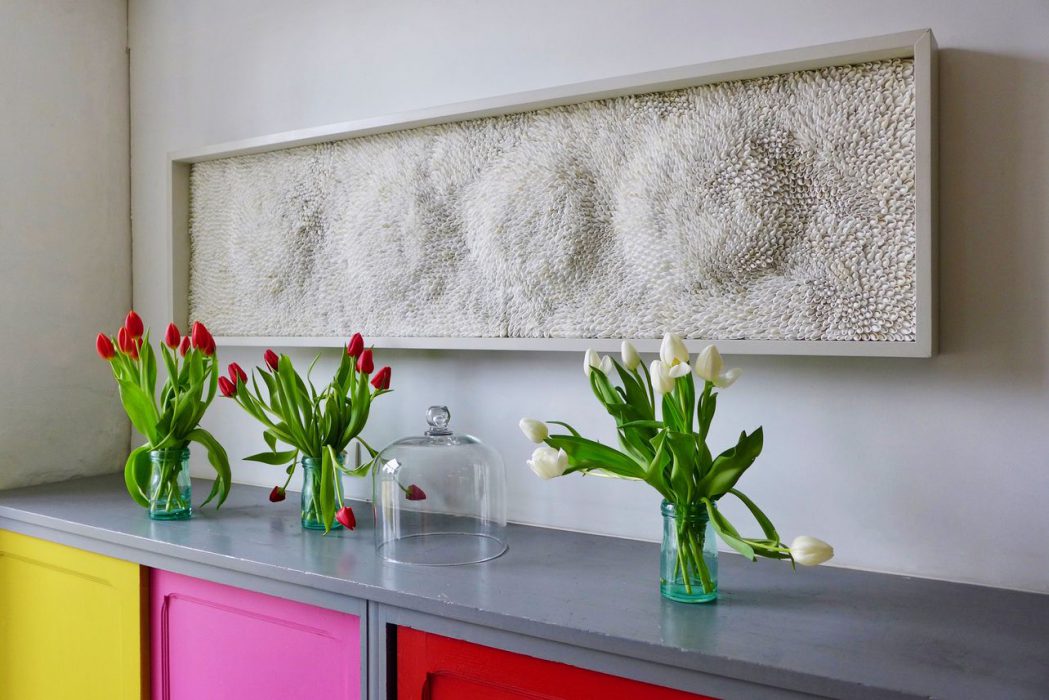 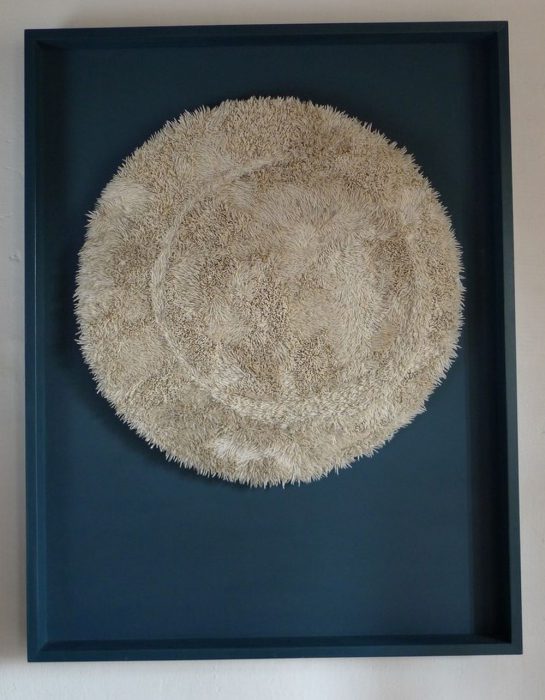 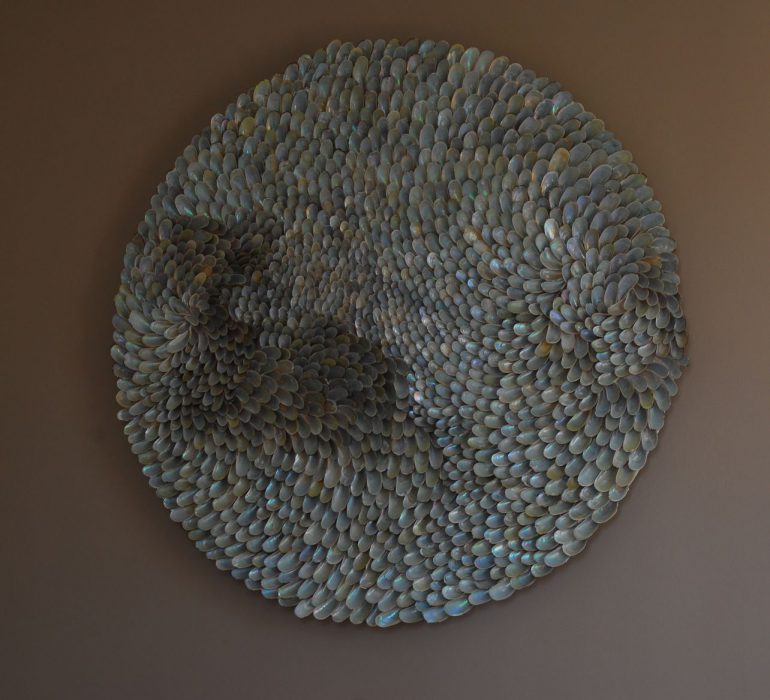 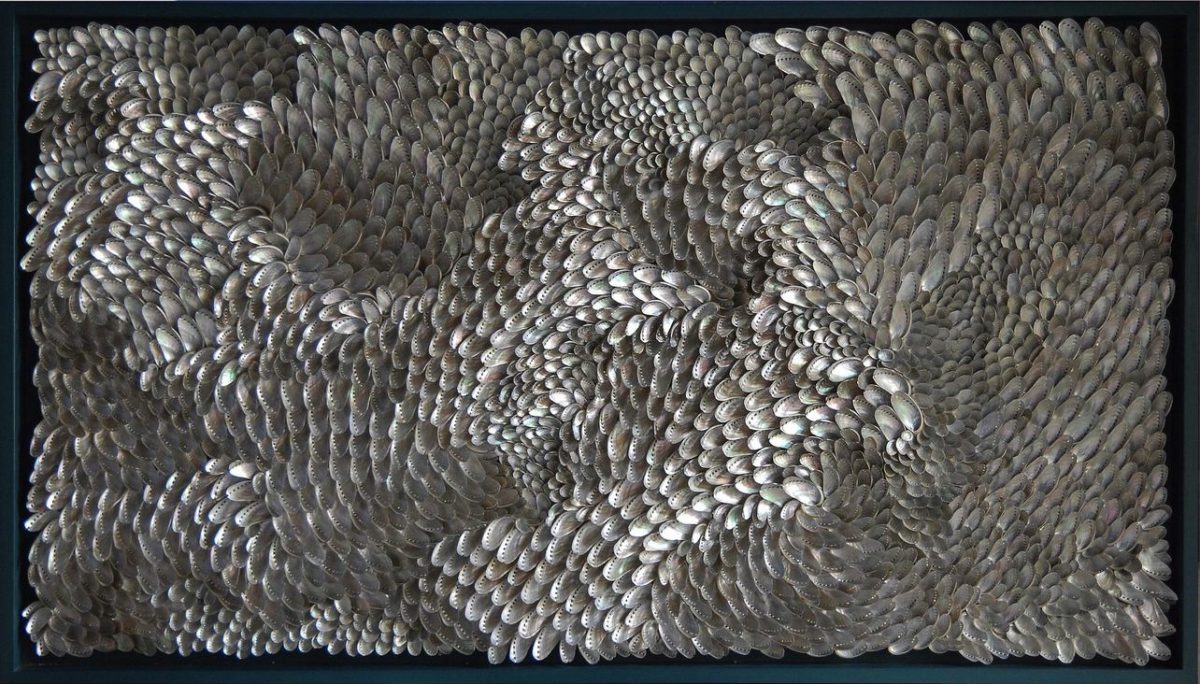 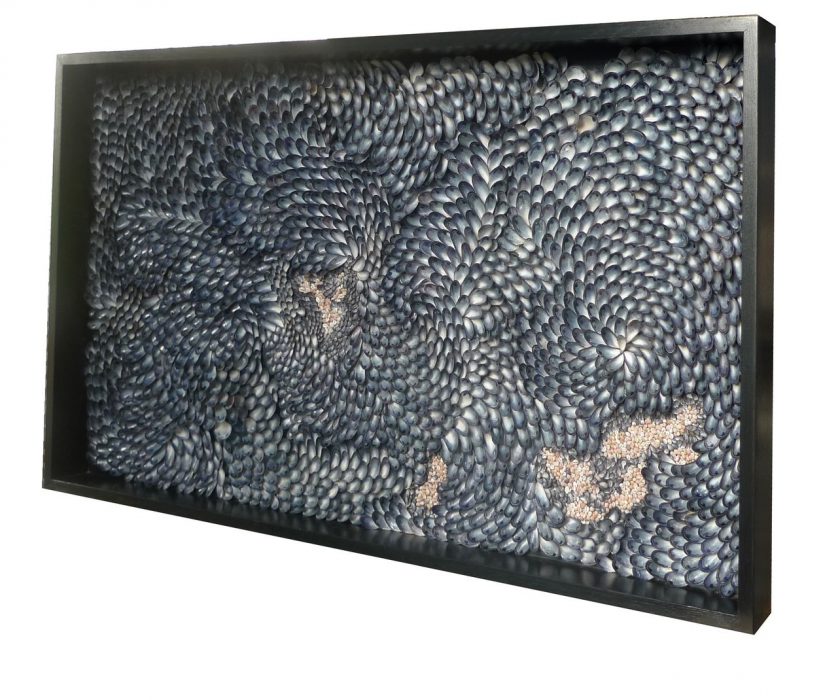 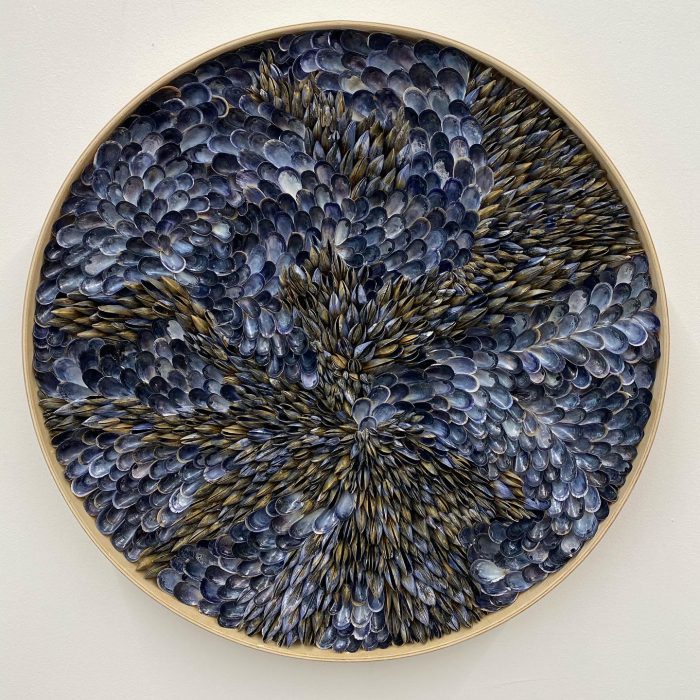 Kerr Wilson’s artwork is also inspired by the drawings of Ernst Haeckel (1834-1919, zoologist) and the sketches of Nigel Peake. However, she keeps in mind the energy and visual impact of a school of fish all moving together like one. With this she brings to mind fluid movement and iridescence reminiscent of the sea, an idea perfectly distilled in the use of perhaps her favourite shell, that of the mussel. The appeal of this particular shell is not just the fact that it is bi-valve, but its iridescence and strong colours of blue, purple, black and white. The light, catching the surface of the shells, emphasises texture and form and Blott plays with this to create studio pieces that bring shell work to a mesmeric art form.

Her fascination with shells began as a young girl, informed by her love of grottoes, follies and any secret place in a garden. Later, when studying for her degree at the Goldsmith Art College of London she kept her hobby to herself, while she studied the more acceptable medium of sculpture. Shell work had acquired a kitsch-factor in figurative work since the 1970’s and to date no shell artist had succeeded in dispersing this sentiment. Despite this, Blott created her first total shell interior in her own London flat in response to a competition run by the prestigious publication ‘World of Interiors’, which she won. Even having been awarded such significant recognition, the accolade will still not broadly accepted by her college contemporaries. However, Blott’s secret obsession survived the skepticism and spoke for itself, and ever since with commissions have flowed thick and fast, taking her all over the world to apply her skill and aesthetic to shell-houses, follies and grottoes as well as interior spaces. There is no question that today we benefit from her single minded pursuit to push aesthetic frontiers.

“One of the most startling aspects of Kerr-Wilson’s work is its graphic quality. She has created, for example, a circle of purplish-blue mussel shells next to waves of miniature white abalone. From a distance, it appears as an almost solid disc; only on closer inspection does the viewer see the medium. Even then, the shells have an intricate sense of motion, so that some doubt remains as to what you are actually seeing.

“It’s all to do with how the light plays on the piece,” she says. (Extract from “Contemporary Natural” – Thames & Hudson Ltd by Phyllis Richardson and Solvi dos Santos)